As labor day weekend as come, Dragon Con came with it, no different than prior years members of our community traveled to Atlanta to enjoy the con.  If you are not familiar with Dragon Con, Dragon Con is a federated convention.  There are many concurrent conventions or "tracks" running at the same time ensuring there is something there for every one.  Dragon Con is also a huge destination for cosplay every year.  Our group showed up throughout Thursday jet lagged from travel and got ourselves checked into the convention hotel.  This was the first year our group had won the hotel hunger games and got a con hotel room.  After unpacking we made our way to the registration line that had wrapped half way around the Sheraton outside and weaved endlessly through the hotel basement.  Even though the line was thousands of people long we where registered, passes in had within 30 minutes.  With the required legwork complete we set out for food.

The Metro is an excellent place to get food, its in the middle of the convention area, open 24/7, has amazing food and a great atmosphere.  The only problem is during dragon con it can take a while to get a seat.  After getting some food we relaxed for a bit and then set out to explore the convention grounds and show the first timers around downtown Atlanta. 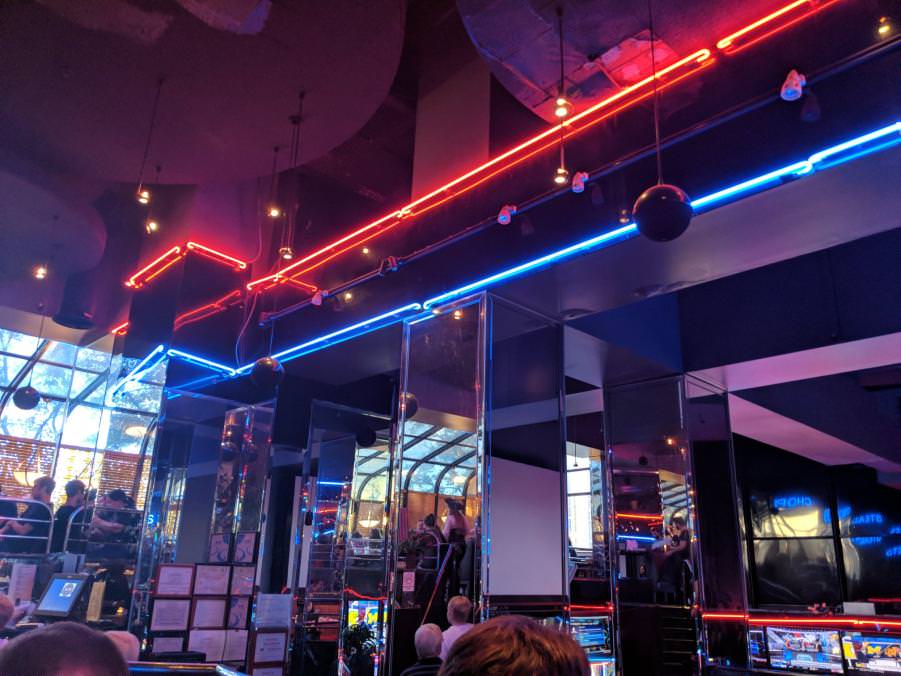 We decided to call it an early night and skipped all of the parties.  The next morning we where up bright and early and hit the EFF track for our first panel. 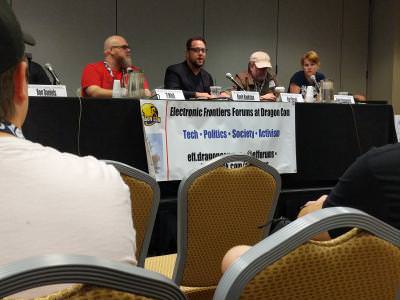 The convention grind had begun and panel after panel as quickly as we could move to them became the norm for the next few days.  This was only interrupted for food, sleep and vendors.

I spent a significant amount of time browsing the vendors this year.  Browsing the fine table top and pen and paper game supplies.  I also had to stop by Chessex Dice and get my yearly Dragon Con D6. 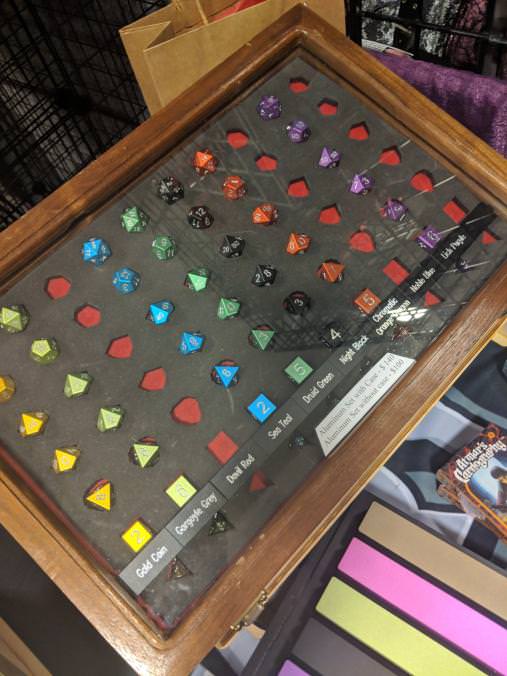 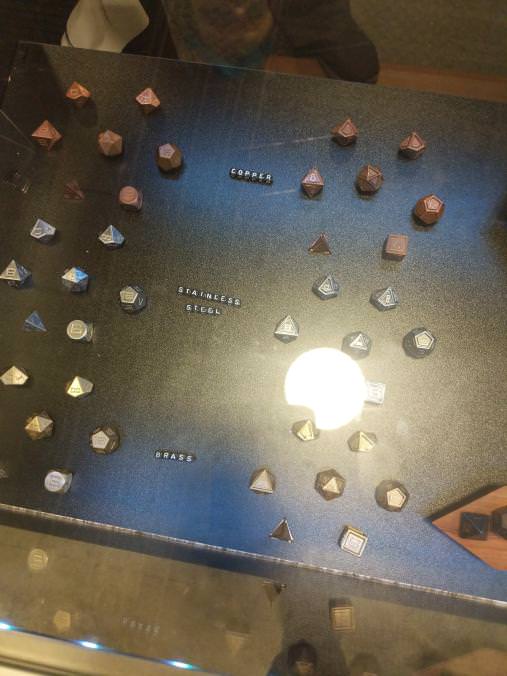 Ultrasabers was also a hit for us again, picking up parts for existing glow bats and buying mystery boxes.  After this year my collection of glow bats has become quite large. 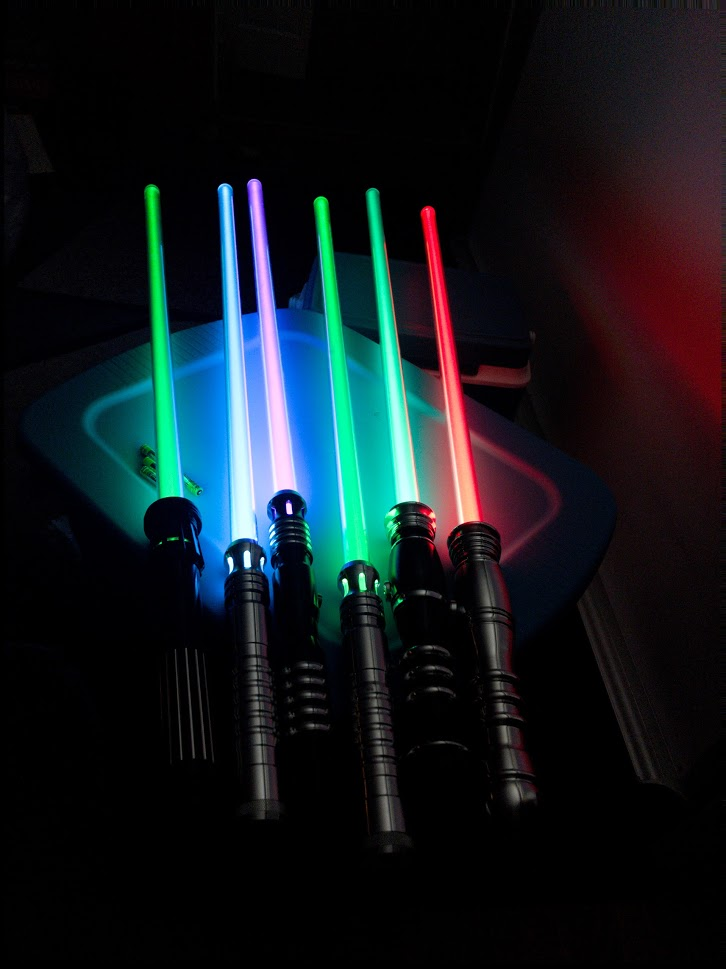 One of the cooler things we found in the vendor space was pair of 13x19 prints.  These will find some nice matching frames and space on my walls soon. 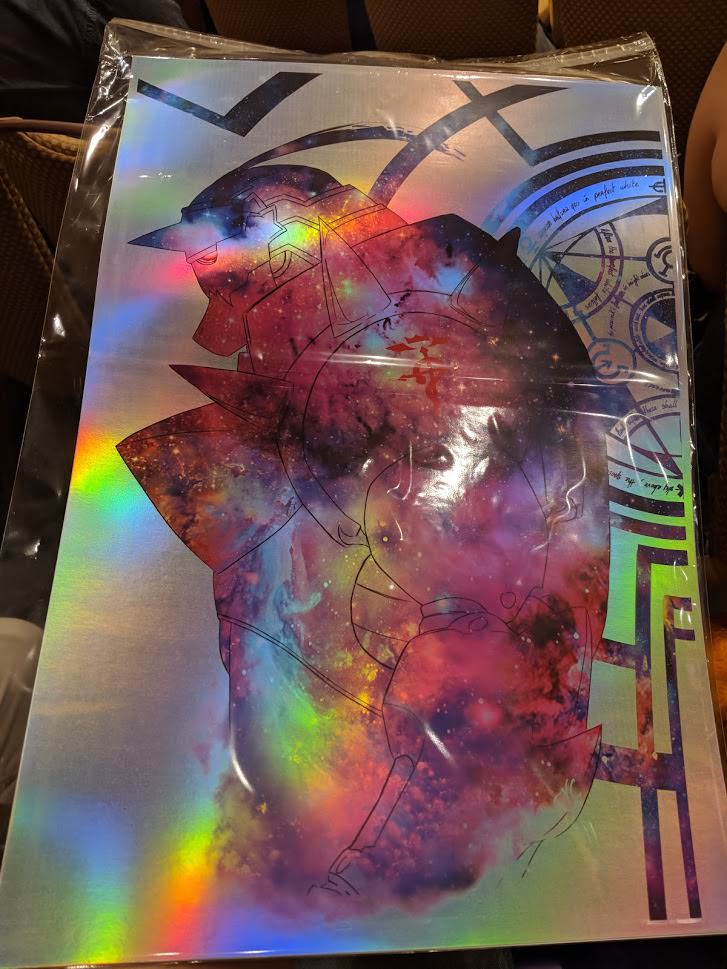 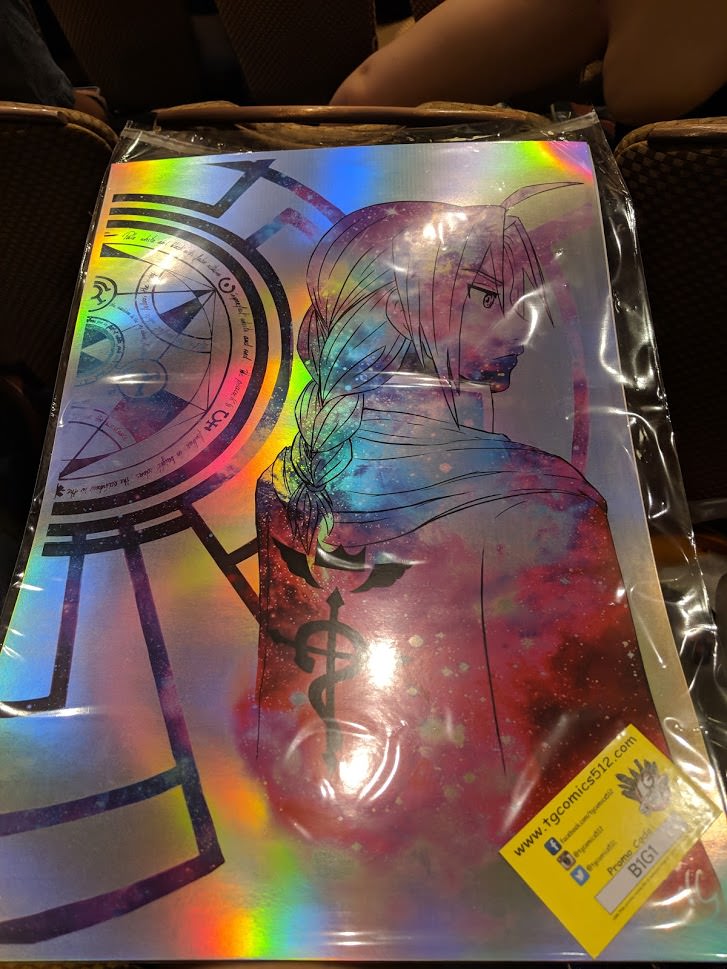 After spending far to much time in the vendor space we had an opportunity to play test Pathfinder 2nd Edition.  This was an huge improvement on the 3.5 version of the game only lacking in classes to play as at this point.  The combat system has been refined and streamlined but not a point where depth and strategy has been gutted out.  Its the perfect balance of deep choices and simple base rules allowing new players to pick up on the system.  They added flexibility in roles for initiative allowing you to roll skills outside of perception for combat initiative, this system is applied to other areas as well allowing for characters to have more options in most situations.  Board position in combat is still important but attacks of opportunity have been mostly removed speeding up the movement phase by removing in most cases the need to consider an attack of opportunity.  Everything in combat is an action now and having 3 of them to spend on movement attacks spells etc means you have more options and less confusion on how to run your turn.  A caster can have a cross bow readied before combat, shoot a bolt, drop it run up on a monster and cast a spell as their turn.  Melee combat characters could attack with all 3 actions at level one, granted they will take a -5 to hit for each attack after the first, but multiple attacks is an option without feats.  For low level casters they also added the nice touch of a cantrip damage spell that is actually worth using.  All in all this is set to be one of the best pen and paper games available when it comes out next year. 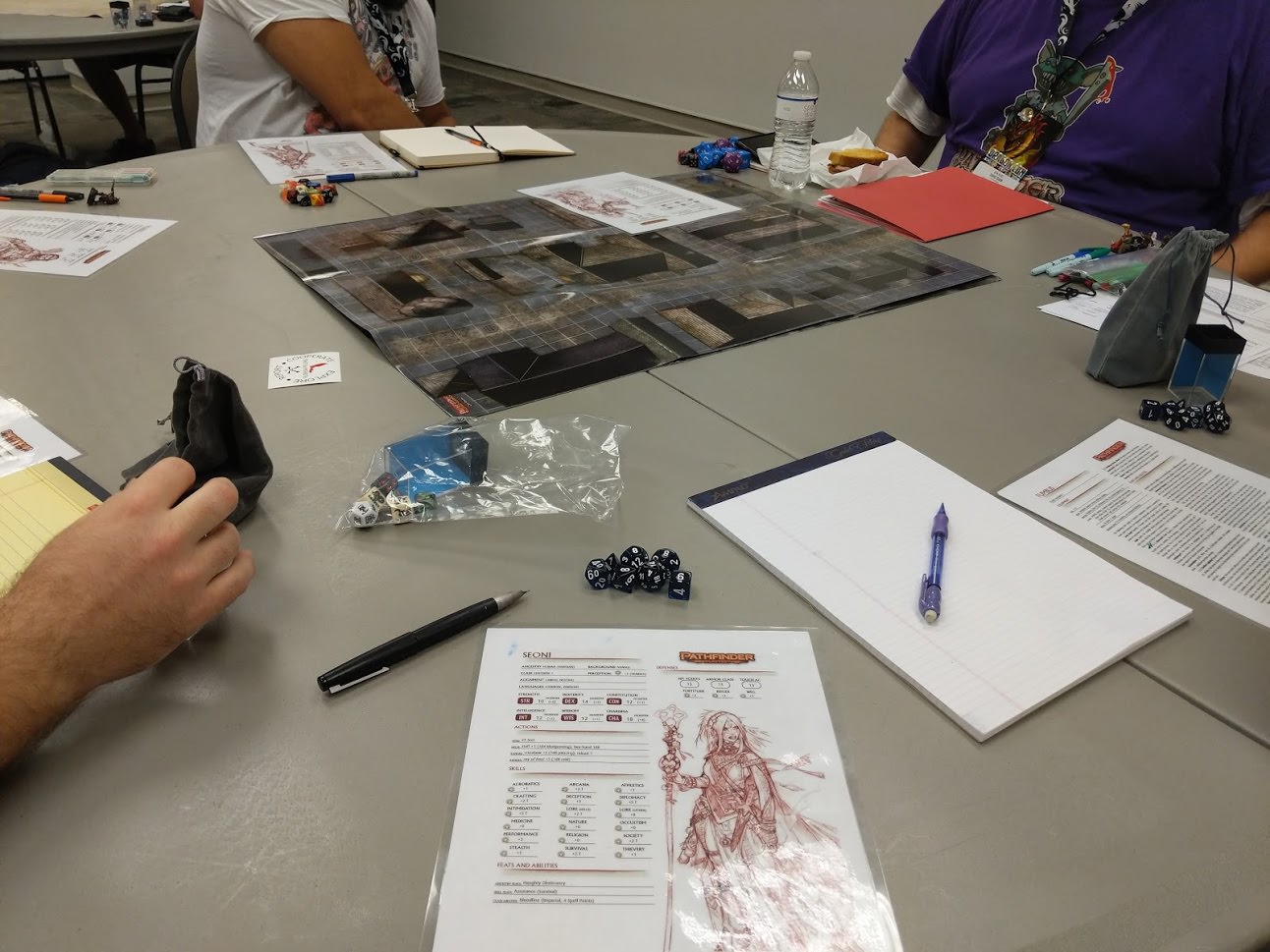 As with every year there was cosplay.  We saw some amazing cosplays first hand.  Here are a few that we had the fortune to stumble across, and an album of collected cosplays from this year. 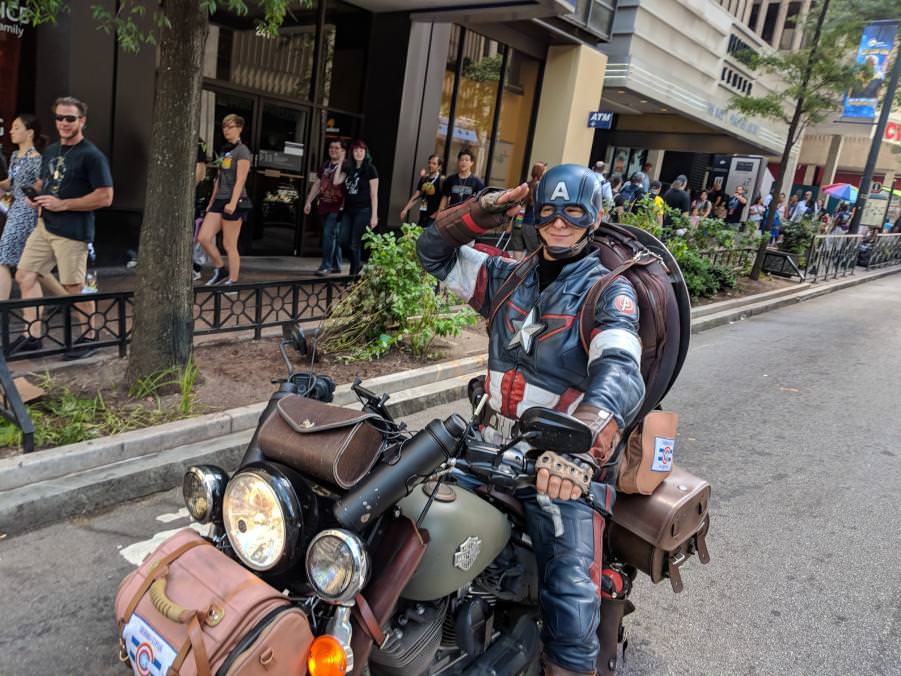 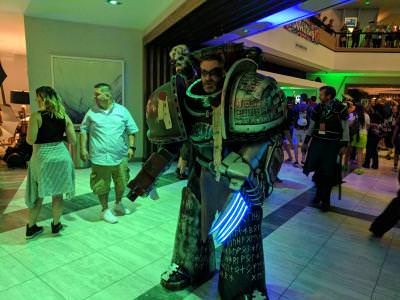 I decided to take the time and attempt the paint and take this year, learned that reaper bones unprimed are a paint to paint, and the value of my nice clean not abused brushes.  While I contemplated why I am even trying to paint this bones figure without having any tools to clean up the flashing and working on a self set time constraint of 45 minutes to get to the next panel I wanted to see Spyder found some people to play MTG EDH with and had some fun. 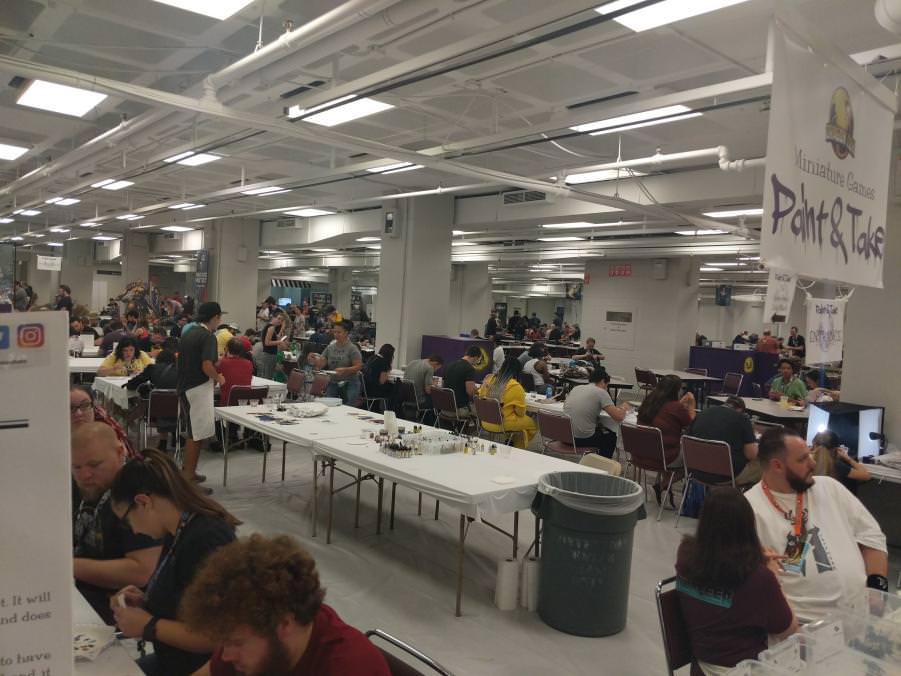 Here is the abomination I painted, next year I am bringing some brushes with me. 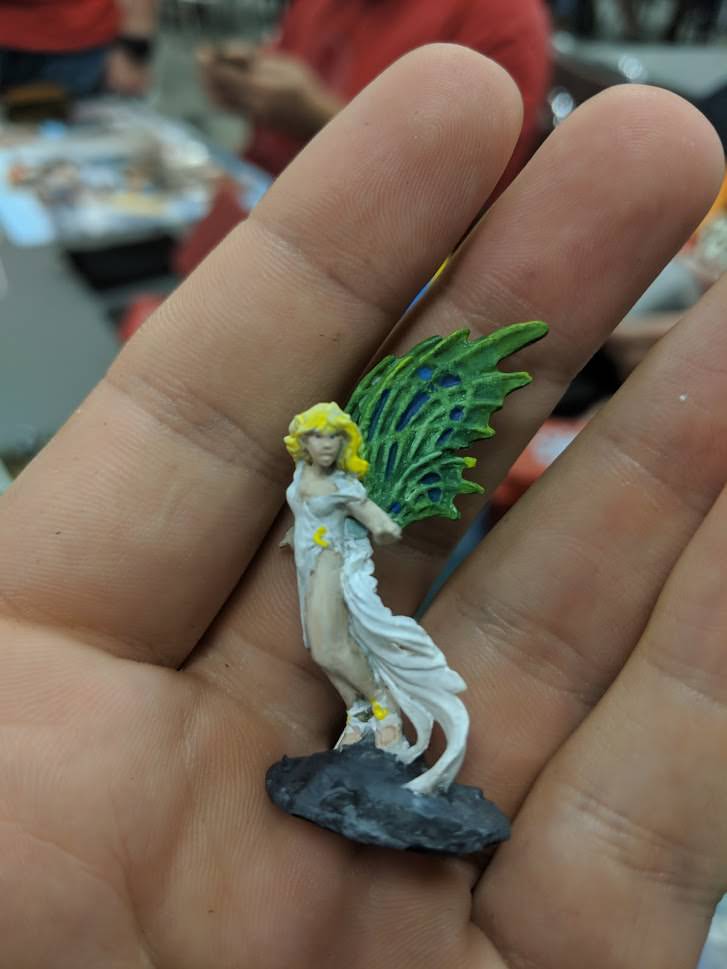 Another fun event to catch every year at dragon con is real steel combat.  The announcer is generally terrible trying to convince you what you are watching is cool even though the ballroom fills to standing room every year but you get to watch people dress up in functional plate armor and beat the shit out of each other. 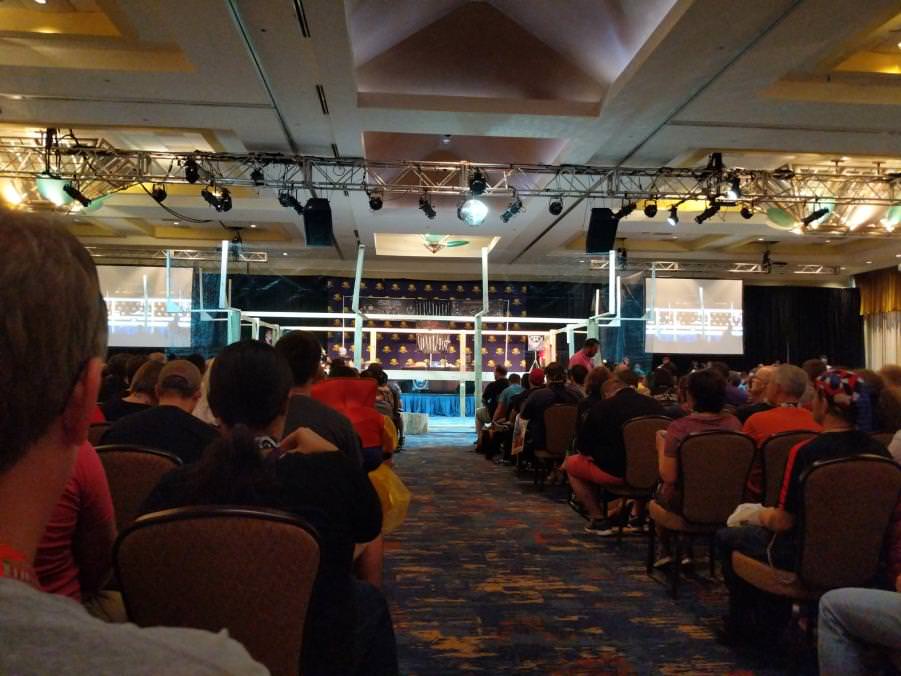 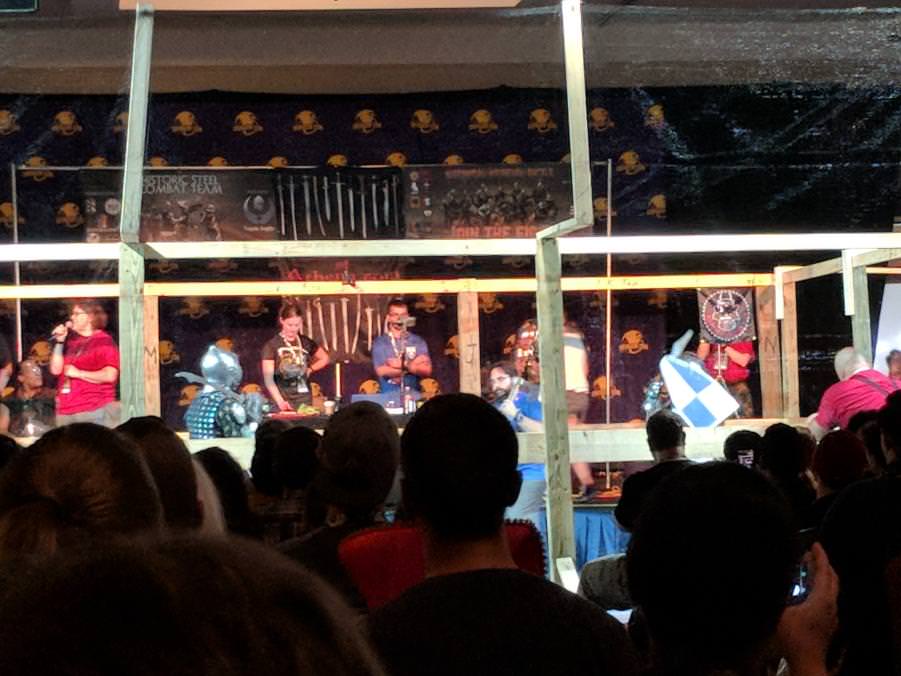 A fun discovery this year was the Apocalypse Rising track had a collection of firearm talks.  This track focuses on post apocalyptic fantasy and how it crosses over into reality with topics such as prepping.  We had some wonderful talks after the panels with Larry Correia and compared Gun Ranges as he is building one at his new home.  I was unaware of who the guy was Spyder was not.  He dragged us to a "Monster Hunter" panel later in the convention, we expected a video game talk, instead we learned about his fantasy novels.  After that I was convinced of the need to read or listen to his book series and enjoyed a surprise panel that was not what we expected but was probably better than what I would have experienced at a video game panel.

Monday finally came and the con died down, one last trip through the sushi line, watched some battle bots do sumo battles and witnessed the city filled with the freaks and geeks return to normalcy.  Con withdraw started to set in and we explored the baron emptiness that once was dragon con.  There where a few people still wearing their con badges and you could overhear patrons in bars retelling stories from the week prior but as Monday continued on almost all signs of the convention disappeared.

There was one thing we found that was not there when we showed up and toured the hotels on Thursday though. 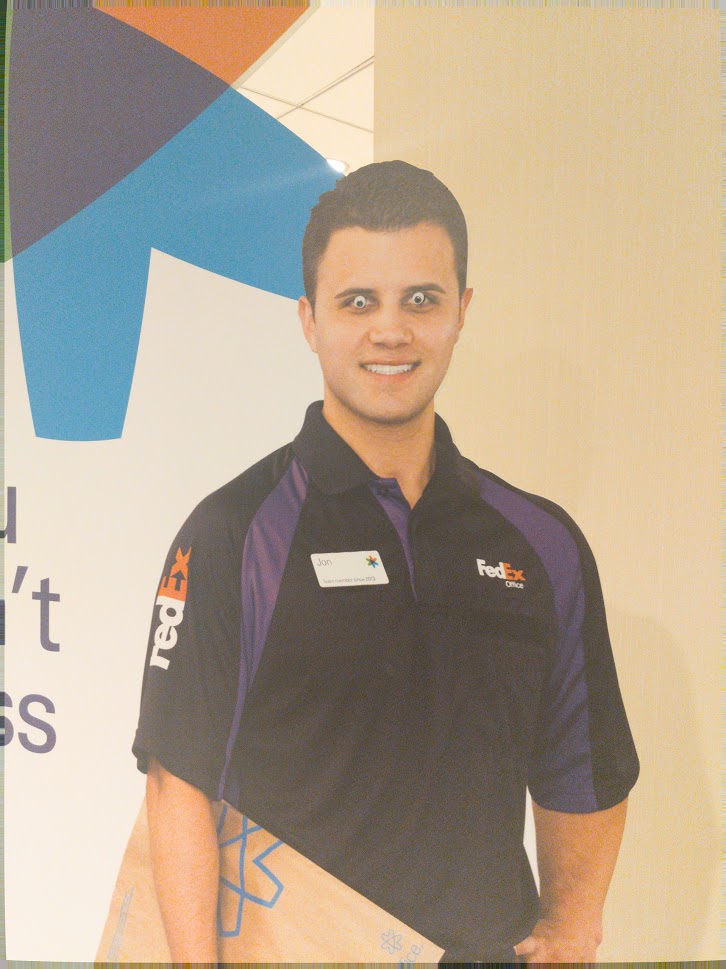 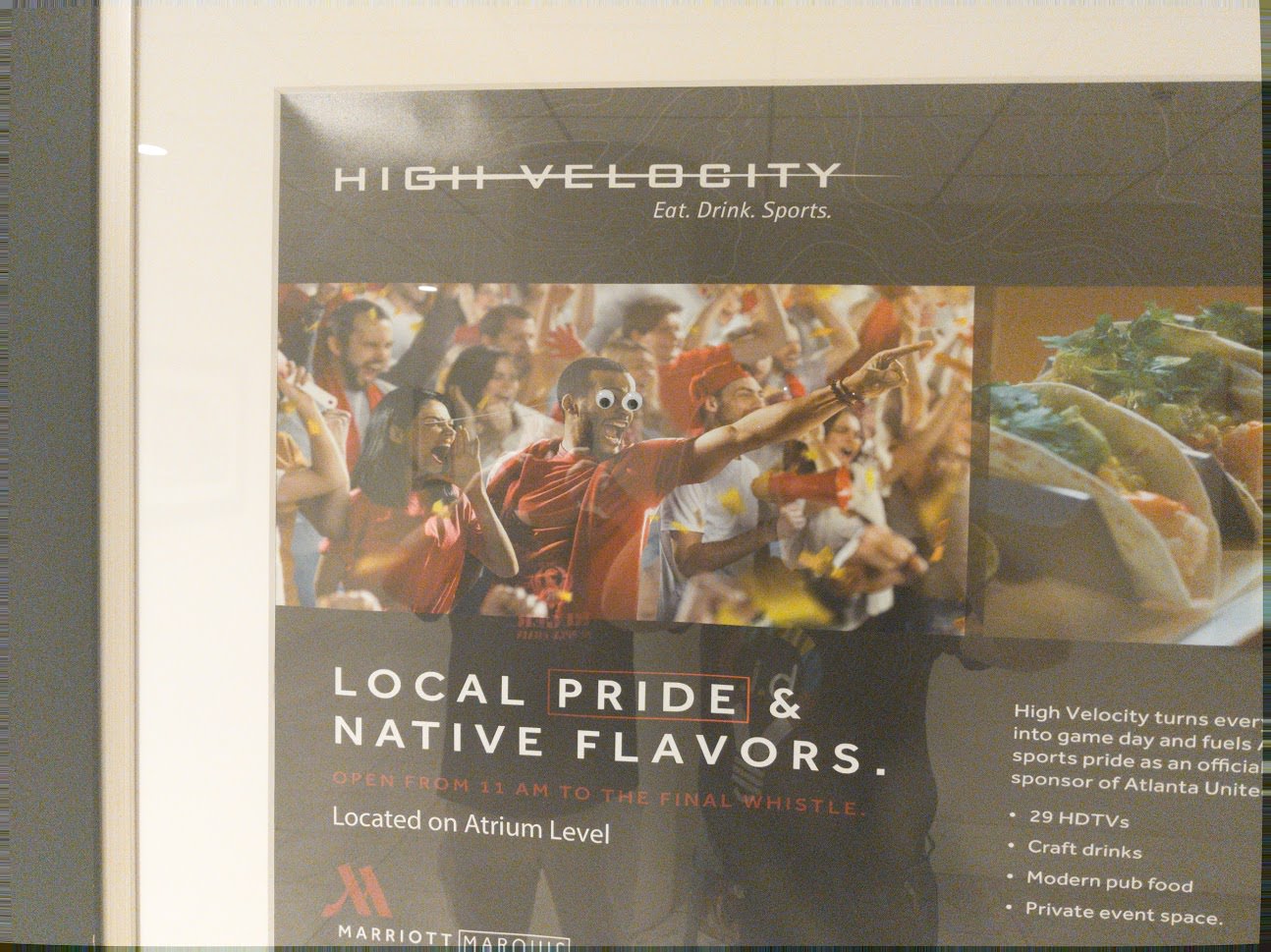 And now the wait starts again, until next year.

Enjoy this video seeing the quality cosplays that are common at Dragon Con.